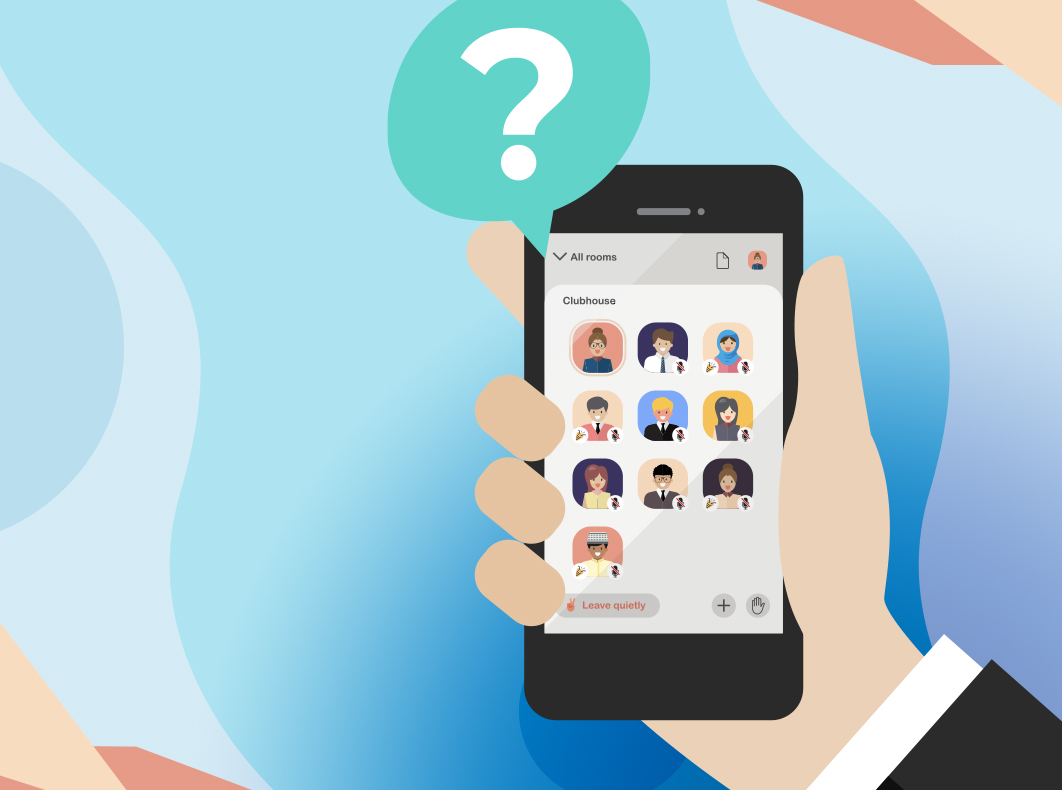 In the spring of 2020, two enthusiasts launched a new social network, Clubhouse, where users can communicate in virtual rooms using only their voice. Entering into the app wasn’t easy — it required getting an invitation from a friend with a referral link.

It would seem that such a concept in the early twenties is doomed to failure. However, the "closed club" for people looking for interlocutors by interests has grown from 1,500 to a million users in less than a year. Now Clubhouse is developing at an explosive pace — investors estimate a startup, which so far works on only one platform, at a billion dollars.

What do the experts say about this:

Clubhouse is a new kind of format for content (or at least one that was not too popular before in the digital world —traditionally this could be compared to radio programs). We can recall traditional formats in the digital world such as text, image, video, live streams, ephemeral content (stories), among others; now live audios that leave no trace have arrived; different from podcasts that stay forever and are more structured.

We can agree that this is part of the ephemeral content, one that lives for a period and then dies. Two important differences are:

1. Happens live (it will not wait for you), contrary to a Story that shows when you click on it and can wait for you for 24 hours.

2. It uses a very demanding sense — hearing. Contrary to sight, with listening, missing some words can lead you to lose the meaning of entirely. This happens less often with visual stimuli since the brain can complete the rest of the image based on what we are seeing.

At Clubhouse we participate in talks like the ones you can have at a casual reunion or event, where every participant (speakers and listeners) benefits from the exchange of ideas.

Now, being a live format that leaves no trace, it requires the audience’s attention at that specific moment. If not, you will not be able to enjoy that talk. At the same time, the format’s nature (audio) makes it very demanding because the audience has to make a conscious effort to take in and process the audio.

I can hardly speak with one person and listen another conversation at the same time. Perhaps a lot of you might recall the headache that comes with social meetings, when someone is talking to you but you can listen to other friends chatting about a more interesting topic, your brain tries to understand both conversations and it simply gets “overloaded.” You have to focus in a single conversation.

That is how Clubhouse works. You need to pay attention to follow the conversation because there is no rewind option. From here, we can understand that someone who has been navigating Twitter for 3 hours will not be as distracted as someone who has been on ClubHouse for the same amount of time. Much less if you are someone that talks, and not only listens. You have to think what you are saying.

If you are an author, the nature of the dynamic is quite demanding. Both time- and ATTENTION-wise. A combination like this can be unfeasible for some authors. For instance, I get to experiment with the complexity of a radio program I participate in every Thursdayl. Being there every Thursday at 10:30 is complicated, even if this is a weekly program. I can only imagine how that would be on a daily basis.

Compare it with this answer I’m giving you days after you’ve asked me, because when you sent the message, I was ill in bed. I would not have been able to sign into Clubhouse at the moment. Wow! Nowadays authors who want to be part of Clubhouse will face the same challenges audio programs do every day.

If you are a listener, there’s no doubt you can listen to it while doing something else, just as with the radio. But, there’s a reason why other formats have replaced radio and television — we are no longer in the era where the whole family would gather around the radio to listen to a live transmission.

I believe options such as Twitter Spaces will be more successful since it can be combined with other formats (tweets) that allow us to experience all formats in a simpler way.

More and more people on the internet ask what is Clubhouse? Clubhouse is a new social network with a feature in voice messages. Unlike other social networks, voices here are not additional, but the main and, moreover, the only communication format. Rumors about an unusual social network started only in recent weeks, although in fact it was created back in February 2020.

Clubhouse is a panel discussion platform that offers chat rooms of interest. This rooms do not have personal messages, photos, videos and memes. A cross between interactive podcasts in real time, conferences with one or more speakers, and conversations at the office cooler, if you like.

Clubhouse's launch coincided with an increase in interest in podcasts and other voice services. But for the most part, the excitement around the social network is bonded to its exclusivity. Access is closed, and you can get there only by invitation from a participant. This has led to the creation of an underground invite market of Clubhouse invites on Twitter and eBay, where prices start at $ 20 and go up to an unimaginable $ 800. 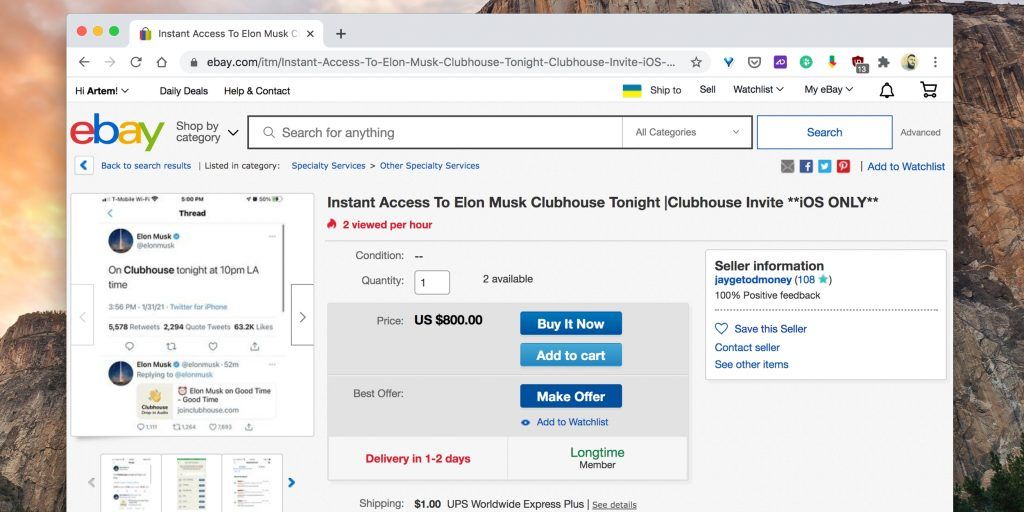 Who made it for?

The Clubhouse is created by Stanford University graduates and Silicon Valley entrepreneurs Paul Davidson and Roen Seth. Both have previously worked at Google and have already built apps. The idea of such a social network came from the developers against the backdrop of the coronavirus pandemic and the need for communication during self-isolation, when people were desperately looking for new ways of communication.

The audience has already become segmented: before everyone cooked in the same "cauldron", now there are more and more rooms, and the average number of listeners, on the contrary, is decreasing. Perhaps everyone just went to the corners, or maybe they decided to take a break after a week in the service.

Podcasters mastered the site faster than anyone else — they began to arrange live versions of the show from the very first days. There are even more marketers and other digital specialists in the service. They, of course, embraced the clubhouse as a new tool for working with content — and began to teach others how to work with it.

Marketers quickly formulated the rules for filling out the profile description and avatars, and also determined the principles of working with the service. Enthusiasts also began to create services around the social network. For example, the Pic.house site, which allows you to create a frame for an avatar and add emoji there to make it stand out.

What happens on it?

In order to get into the Clubhouse, you need to have an iOS device with the Clubhouse app and receive an invitation from a registered user. This strategy of “a closed club only for insiders” plays into the hands of the developers — people who want to get into the social network line up in advance.

After registration, the lucky ones will have a standard procedure with filling out a profile. You can specify a description of your profile, links to your social networks, subscribe to other users, collect subscribers for yourself and, in fact, start communicating.

Despite its rather simple concept, social media isn’t like audio messages in messengers or Zoom. There are many rooms in front of the user, to which you can connect at any time. Each room accommodates up to 5,000 people and is dedicated to a specific topic — for example, politics, music, coronavirus restrictions, and anything else. 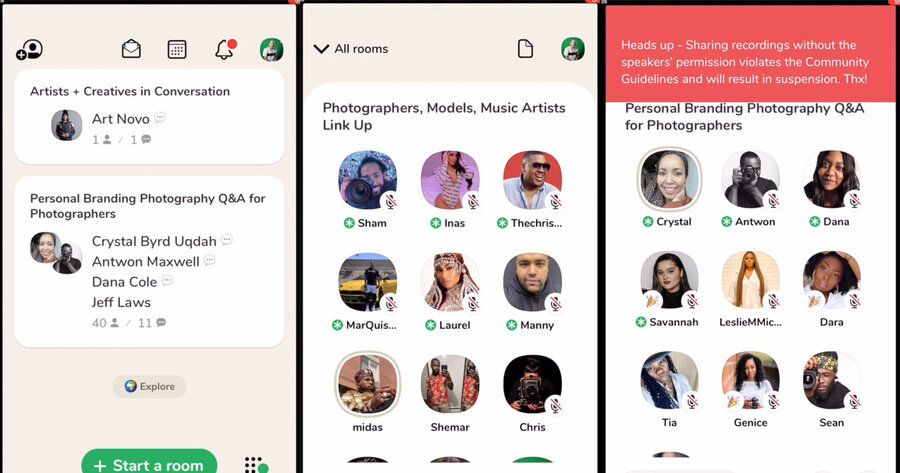 The flow of the conversation resembles both podcasts in that you can intervene and something like a press conference. So, inside the room people are divided into speakers (creators of the room, discussing the set topics) and listeners. Listeners with the help of a special function "raise their hand" and ask a question of interest to them, argue or give the conversation a new vector of development. In this case, they fall into the group of speakers.

There is an important nuance: you cannot save the broadcast and record it. The social network user who tries to record the broadcast gets banned.

It’s also important that the rooms in the Clubhouse don’t appear spontaneously. They can really be viewed in the feed, choosing the one that suits you, but in general, all conversations can be scheduled and entered into the calendar. Then the users waiting for them will receive a push notification about the imminent start of the session.

In the Clubhouse you can also join hobby clubs that create rooms on an already known range of topics. Any user can open the club, but before that the application must be moderated.

Clubhouse invite — how to get one?

As we mentioned above, you won't be able to simply download the application and register in it. To use the functions and communicate, you need to receive an invitation from existing members, each of which is given 2 invites, which he can dispose of at his discretion (a gift to friends or sell). 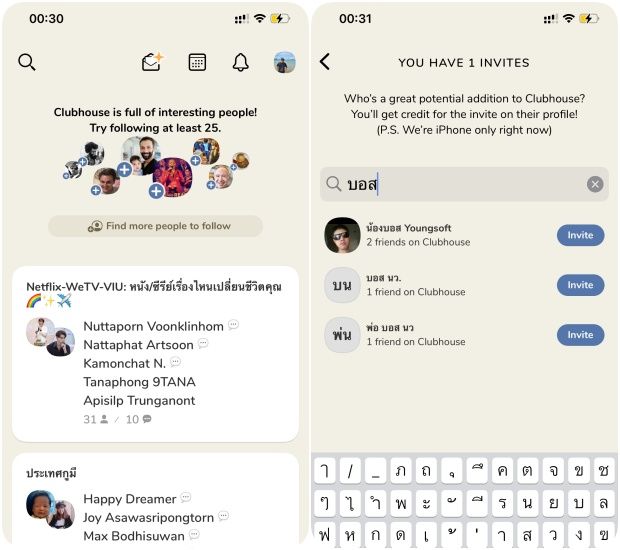 Clubhouse is a new social network where users can communicate only by voice. At the moment, the platform remains closed to the general public, you can get there only with the help of friends who have already gained access to the application.

What is the Сlubhouse app used for?

The Clubhouse app is currently only available on iOS. Any iPhone user can download the application from the app store. Once you log in you can listen to conversations and participate in them.

An important difference between Clubhouse and Zoom, Twitch is its social focus. Clubhouse acts as an independent social network, which is growing rapidly due to a unique approach to gaining new subscribers.

Clubhouse is now great for people who love to chat and miss the public — like celebrities — or for those who just want to listen to an interesting conversation. The clubhouse can be the salvation that you need during the next covid lockdown. Eventually, when it grows and becomes important, it could become a new trend.

Can I use Clubhouse on the iPad?

Sure, but it isn’t optimized for iPadOS. So yod’d have to use the application either in a small window or on the contrary experience the inconvenience of the strange doubled size.